Prostate cancer is a form of cancer that develops in the prostate, a gland in the male reproductive system that helps make and store seminal fluid.

Most prostate cancers are slow growing; however, there are cases of aggressive prostate cancers. The cancer cells may metastasize (spread) from the prostate to other parts of the body, particularly the bones and lymph nodes. Prostate cancer may cause pain, difficulty in urinating, problems during sexual intercourse, or erectile dysfunction. Other symptoms can potentially develop during later stages of the disease.

Prostate cancer tends to develop in men over the age of fifty and although it is one of the most prevalent types of cancer in men, many never have symptoms, undergo no therapy, and eventually die of other causes. This is because cancer of the prostate is, in most cases, slow-growing, symptom-free, and since men with the condition are older they often die of causes unrelated to the prostate cancer, such as heart/circulatory disease, pneumonia, other unconnected cancers, or old age. About 2/3 of cases are slow growing, the other third more aggressive and fast developing.

A blood sample is taken by your doctor to check for prostate specific antigen (PSA), which is produced by the prostate and is increased by cellular abnormalities within the prostate.

PSA is a useful tool for diagnosing and monitoring prostate diseases, but further tests are required to confirm which condition is present. Yearly PSA screening is recommended from the age of forty.

Your doctor inserts a gloved finger into the rectum to feel the condition of the prostate that lies close to the rectal wall. If your doctor feels something suspicious such as a lump or bump, further tests will be carried out. Other tests are needed to enable a more accurate diagnosis.

This is a trans-rectal ultrasound (TRUS) guided prostate biopsy. It involves taking small pieces of prostate tissue to be looked at under the microscope. The aim of a biopsy is to find any cancer that may be present. Having a high PSA level alone does not automatically mean that you need a biopsy. If your cancer has already spread outside the prostate, you may not need a biopsy. You may be offered scans, such as a bone scan.

New technology is capable of distinguishing between high grade and low grade prostate cancers and may be useful.

The tests performed are used to determine the stage of the prostate cancer. Biopsy specimens are analysed to find out how aggressive the cancer is.
The staging system describes how far the cancer has spread within and/or beyond the prostate capsule.

Stage 1/A: There are no symptoms and the tumor is confined to the prostate. The prostate feels normal and the PSA is elevated.

Stage 2/B: Again the tumour is confined to the prostate and although symptoms may not be apparent, it can be felt during a DRE.

Stage 3/C: The tumour has spread just outside the prostate gland and may effect nearby tissue.
A common symptom is difficulty in urinating.

Stage 4/D: Also known as Metastatic cancer, the tumour has spread to other parts of the body. Bones and Lymph nodes are commonly afflicted and symptoms may include fatigue, weight loss, bone pain and difficulty urinating.

Bone Scan
A nuclear medicine study to see whether the cancer has spread to the bones. The skeleton is scanned 3 hours after injection of a non-harmful radio-isotope.

CT Scan
A scan looking for involved lymph nodes in the abdomen and pelvis.

The age and underlying health of the patient are important factors in deciding whether treatment for clinically localized prostate cancer is necessary as most prostate cancers are slow growing. Once a decision has been made to treat a cancer there are several factors, which dictate the best type of treatment for an individual cancer. The clinical stage, the prostate specific antigen (PSA) level, the Gleason score, the position of the cancer, the extent of the cancer and the likelihood of disease penetrating the capsule are all factors which influence the choice of therapy.

Active surveillance with curative intent is an alternative to immediate intervention that may reduce over treatment. Men with cancers thought to pose minimal risk to life are monitored, and curative treatment is recommended if higher-risk features are detected during follow-up. In the short term, results from active surveillance studies have demonstrated a low risk of prostate cancer–specific mortality. Nonetheless, a prevailing concern is that surveillance may lead to a delay in treatment and may sacrifice the window of opportunity for cure.

Surgery is a common choice to try to cure prostate cancer if it is not thought to have spread outside the gland (stage T1 or T2 cancers).

In the more traditional approach to doing a prostatectomy, the surgeon operates through a single long incision to remove the prostate and nearby tissues.

For the Open radical retropubic prostatectomy operation, the surgeon makes a skin incision from the belly button down to the pubic bone.

If there is a reasonable chance the cancer may have spread to the lymph nodes (based on your PSA level, DRE, and biopsy results), the surgeon may remove lymph nodes in the pelvis at the same time.

Laparoscopic approaches use several smaller incisions and special surgical tools to remove the prostate. This can be done with the surgeon either holding the tools directly, or using a control panel to precisely move robotic arms that hold the tools.

For a laparoscopic radical prostatectomy(LRP), the surgeon makes several small incisions, through which special long instruments are inserted to remove the prostate. One of the instruments has a small video camera on the end, which lets the surgeon see inside the abdomen.

Laparoscopic prostatectomy is minimally invasive and has advantages over open radical prostatectomy, including less blood loss and pain, shorter hospital stays, and faster recovery times although a catheter to drain the bladder will be needed for about the same amount of time.

This is the new approach to laparoscopic surgery using a robotic interface called the da Vinci system (RALRP). The surgeon sits at a panel near the operating table and controls robotic arms to perform the operation through several small incisions in the patient’s abdomen.

Robotic-assisted laparoscopic radical prostatectomy has advantages over the open approach in terms of pain, blood loss, and recovery time. It also allows for greater precision in nerve sparing at 10 times magnification and in 3D.

Benefits from Robotic Prostatectomy include:

Click here to find out more about Robotic Prostatectomy.

The Low Dose Brachytherapy is a technique for treating prostate cancer, using tiny radioactive seeds of Iodine-125 that are inserted permanently into the prostate gland. ‘Brachy’ means close and, in this treatment, the radioactivity is inserted directly into the cancerous organ. This is unlike conventional external beam radiotherapy, which travels through the body tissues before reaching the prostate gland. Brachytherapy provides a higher, more localized radiation dose to the prostate and minimizes the effects on the surrounding tissues, such as the rectum and bladder.

The seeds are tiny canisters of Titanium (4.5mm long by 0.8mm diameter), which contain the radioactive isotope Iodine-125. The half-life of radioactive Iodine-125 is approximately 60 days, which means that most of the radiation is released from the seeds into the prostate gland over the first 3 months. They continue to be biologically active for about 9 months in total. After that, they become effectively inactive.

The latest techniques for Brachytherapy were developed in the mid-1980s with the arrival of sophisticated ultrasound probes. These devices enable the accurate implantation of seeds into the prostate, allowing high doses of radiation to be delivered safely.

There are now long-term results from patients who were treated up to 16 years ago, which show that this form of treatment is highly effective in treating and curing patients with early prostate cancer.

Brachytherapy appears to be as effective as other conventional treatments, such as surgery (radical prostatectomy) or external beam radiotherapy, but with a lower side-effect profile.

However, not all patients are suitable for brachytherapy and some may be better suited to other prostate cancer treatments.

doesn’t describe the rate at which the radiation is given; it is a completely different process for delivering brachytherapy radiation and is reserved for more locally advanced cancers. HDR uses a single high-intensity radiation source on the end of a thin cable that is inserted temporarily. It involves radiation through up to 20 thin needles inserted into the prostate, which are removed the following day. 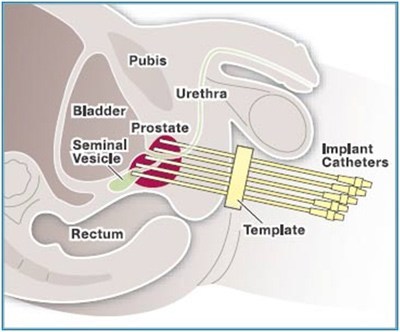 Figure 1. Illustration of the implant catheters entering the perineum going into the prostate and seminal vesicles.

Radiotherapy involves the use of various types of X-rays (radiation) to treat cancer.

External beam radiotherapy (EBRT) has been the traditional method of delivering the radiation. Short pulses of tightly focused beams of X-rays are delivered from outside the body into the prostate for a few minutes each day. Treatment continues five days a week for seven weeks. Conformal radiotherapy or IMRT, allows the X-rays to be directed very accurately to the prostate in three dimensions. EBRT has a track-record of success in “curing” cancers confined to the prostate that is very close to that of surgery or brachytherapy. The long term overall quality of life after EBRT has also been shown to be the same as for patients undergoing surgery or brachytherapy. It is quite common for doctors to recommend hormone therapy immediately before or after radiation as part of the total treatment. This is particularly true for patients who have Gleason 7-10 or a PSA over 10. In these situations, hormone therapy has been shown to improve cure rates.

From a patient’s perspective, the advantages of EBRT are that it is less intrusive and stressful than surgery, with no risk of infection. In general it is more suitable for older patients, particularly in those with other health problems that make the risk of surgery greater. The disadvantages are that time for treatment is much longer and may involve travel and accommodation problems, particularly for country patients.

Because prostate cancer often grows very slowly, some men (especially those who are older or have other serious health problems) may never need treatment for their prostate cancer. Instead, the recommend approach is known as expectant management or watchful waiting. When the cancer starts to spread the cancer can be controlled for a few years using hormones, which can be cycled. 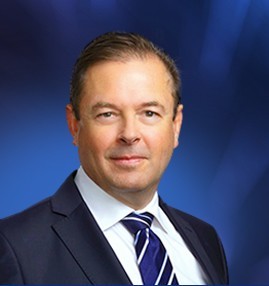